When people come to the woods for the first time and are introduced to forts, they are often puzzled.  They look around at what is usually a jumble of sticks, a pile of monkey brains, or a seemingly random assortment of rocks, and ask, “What makes this a fort?” I understand – they expect a classic walled and roofed shelter, a more rigorous fortification, a clear territorial boundary. Sometimes this happens. 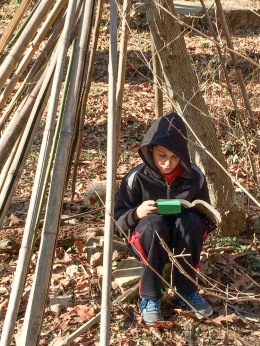 A group of kids, usually with one or two dedicated designer-builders, will gather materials and construct something that is clearly a shelter, attracting considerable attention and admiration from other children.  Usually they spend no time in it.  Once construction is deemed complete, the fort is often abandoned, having served its purpose.

A fort in the Jemicy woods, as I’ve heard old kids explain to a new, puzzled cohort many times in the fall, means a place to call your own.  It is less about the structure that you build, and more about the affordances that attract you to that particular spot: on the stream, overhanging spicebush branches, near the buckeye tree, by an old brick dump. A chosen spot is officially flagged (with a strip of cloth or surveyors tape) and remains “owned” until abandoned – which might mean ownership lasting a few weeks, or a few years. The flag might be the only sign that a spot is a fort. 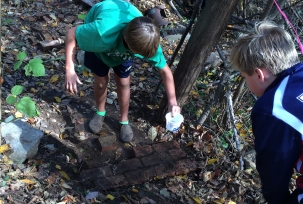 Affordances are interactive.  They invite action of a particular kind, which very often involves organizing, or arranging theseemingly disparate jumble of objects and people in the woods into meaningful order. For some kids, it is this act that creates a lasting bond to the spot that they have chosen as a fort.  Some middle school boys unearthed a pile of old bricks and set about paving an area beside their fort. They told me that they expect this to remain long after they have graduated, and pointed to a stone wall constructed years ago by some other inhabitants of that fort. “And probably if we have kids they’ll have dyslexia and come to Jemicy, too.  So they can keep working on this.”

A younger boy asked me the other day to come look at his fort in the pine woods, where the younger aftercare kids play. “I’ve just spent a day organizing my fort.”  His tone was excited and proud, but once we arrived, he sighed with the weariness of heavy responsibility. “It took so much work to get all of this cleaned up, because someone sold me his fort and everything in it, so I had to organize all of that too.” He gestured to a meticulously arranged assortment of glass, rocks, and other objects under a teepee-like stick and bamboo structure.

“This is the living room, and this is my garage in the back here,” he pointed out, and then scowled as he studied the garage area. “This is still a mess.  I need to make room for more storage.”  He turned to look at another bamboo branch lying nearby.  “That… I guess I’m going to sell.” He studied the fort for a moment and then dashed off to consult with a friend about his furnishings.

What do kids like this do when they don’t have opportunities to organize their own spaces?