As I was out walking on this first day of true New Zealand autumn, the early morning air carried the distinct aroma of Japanese honeysuckle (Lonicera japonica), a sensation that I usually associate with spring.  My first response was to inhale deeply and savor the scent, feeling a strong urge to taste that drop of nectar at the base of the flower. 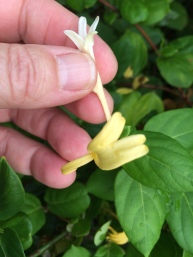 But these flowers had no nectar, and the next reaction kicked in: despair at the damage the vines were causing the trees they covered. This is considered a highly problematic introduced species here, as it is in the United States. How was NZ, already beset by innumerable invasive species, going to manage this rampant pest?

When it comes to waging war on pest species in New Zealand, the arsenal deployed by the government and its agencies is huge – and as diverse as the species it intends to contain.  It has to be, as each of the species requires its own particular management approach. Poison and traps are one of the most obvious weapons against small introduced mammals, appearing in every green space I’ve visited, with obvious warning signs for curious humans.  The school programs provided by environmental organizations often directly promote and involve students in pest management strategies at school and home alike.

Other pest control measures employ living agents imported from the home range of the invasive species. This is a tricky business, as one species brought in to control another can sometimes itself become a problem.  Magpies (Gymnorhina tibicen) were imported to NZ from Australia in the 1860’s to control insects in the newly created livestock pastures, protected by law through the 1950’s, and are now considered a pest species due to their aggressive impact on other birds’ nesting and feeding habits.

Most living biological control agents, however, are tiny and secretive, such as the parasitic wasps that specialize on a particular host in its native range.  They are tested in captivity in NZ to be sure that they won’t accidentally become a problem for desirable insects, then released to find their targeted host, like programmed drones with the capacity to reproduce.

Sometimes this is effective; sometimes not.  Some of NZ’s greatest introduced invertebrate problems are “social wasps” like the two introduced Vespula species and paper wasps.  Parasitoid wasps were brought in to manage these, but have not yet established themselves broadly enough to have a measurable effect.  Current research is finding living pathogens such as fungi more capable of controlling social wasp populations.

Pest plants are also often controlled with insect agents rather than chemicals. A recent article in the local news hailed the release of three species of beetle, each specifically targeting a different part of the Tradescantia plant known commonly as Wandering Willie.

The larvae of the beetles will devour either leaves, stems, or leaf tips, and biologists hope that this will help to control this fast-growing plant that has the ability to grow from any node that touches the ground, and forms mats on the ground so thick that seeds from other plants cannot germinate.

Weevils, moths, and hover flies are some of the other insect agents that have been brought to NZ with the hope of controlling out-of-control species.  As I was looking over the list of targeted species for NZ and their biological controls, I was surprised to see that Japanese honeysuckle was listed as a host species for the Honshu white admiral butterfly (Limenitis glorifica).  The butterfly has supposedly been released in several locations here, and researchers are still waiting for it to become well established to gauge its effectiveness. In the US, as far as I can tell, no effective biological controls have yet emerged for Japanese honeysuckle.

The line between what humans consider a pest and what they preferentially cultivate remains blurry, and a problem.  I may love the scent of Japanese honeysuckle on the first morning of autumn in New Zealand, but the plant out-competes natives.  Likewise, I am thrilled to see butterflies visiting a lovely flowering bush, but when that bush is Buddleia, not so much. It, too, is listed as a pest species, with an imported weevil, ​Cleopus japonicus, as its control agent. 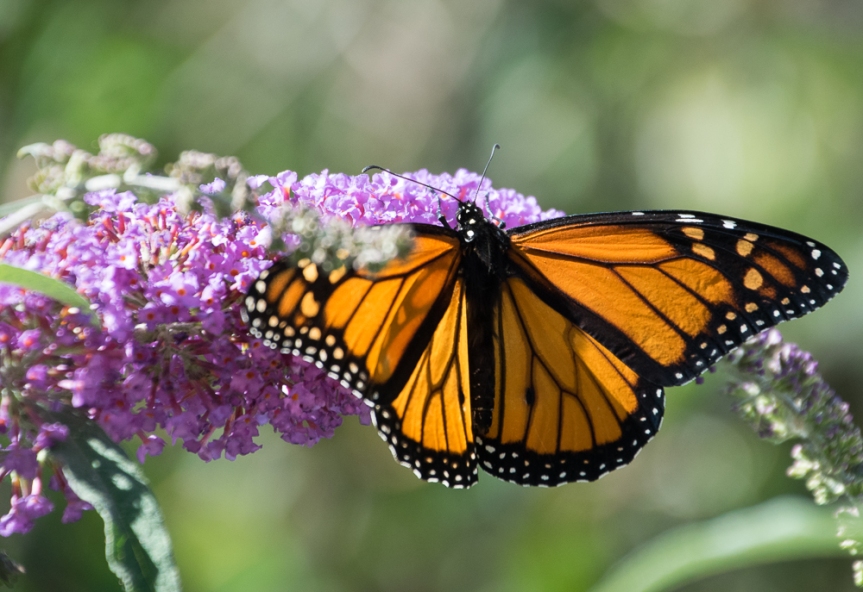 The beloved monarch butterfly is an import from North America, and while the adult will happily nectar on butterfly bush, its caterpillar feeds only on milkweed.  In New Zealand, this host, the swan plant (Gomphocarpus physocarpus), comes from east Africa.  So far, this intercontinental partnership seems harmonious and welcome in the NZ landscape that has adopted them.