‘Twas the week before winter break,

and Jemicy transformed itself into a wonderland of costumes.

While the lower school students were outfitted for their performance of Snow White, the rest of the school celebrated each day with a different theme: wacky-tacky, pajamas, crazy hats, blizzard-white, holiday festive. 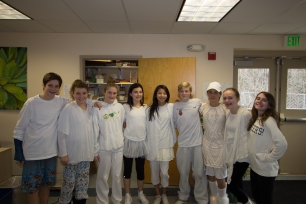 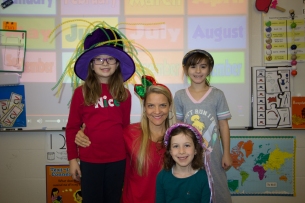 In the woods during recess, we continued to search for signs of creatures still active in spite of plummeting temperatures. In the relative safety of the stream, a frog caught one student’s eye as it crept through the silty substrate. A hellgrammite brought to the surface slowly uncurled, displaying formidable mandibles that it will probably not be using until the water warms in spring.

Meanwhile, I was concentrating on the bark of the trees lining the banks of the stream. “Why are you staring at the trees like that?” my companions wondered. “Trying to find a bug in a costume,” I replied, pointing to the patches of bright green lichen on the bark. “Look for a tiny bit of this that moves.” Within a minute, one child had spotted it: a minuscule lichen-covered blob making its way along a ridge of bark. We carefully pried it off the tree and flipped it over to see who was wearing this masterful disguise. It was a green lacewing larva, known as “debris-carrying” for their habit of picking up bits of plant material to camouflage themselves.

They are one of the few insects that can be found moving about even in winter temperatures, when the sun warms the dark tree trunks. It is a costume effective enough to evade the sharp eyes of winter birds, but we shall see how many more larvae the newly-trained Jemicy kids can spot before they metamorphose into their winged adult form.