Maryland’s winter is progressing by fits and starts, with balmy weather one week and Arctic blasts the next. The state of water during these shifts is an ever-present theme. Will it snow? What do we do when it rains? Is it too foggy to see the roads? Is that pavement just wet, or dangerously icy?

Water’s changeable winter phases afford kids opportunities that are unavailable during other seasons. When we got a bit of snow, all manner of sleds found their way to the slopes. Some kids scraped up and collected it to strew on a steep hillside for sliding. 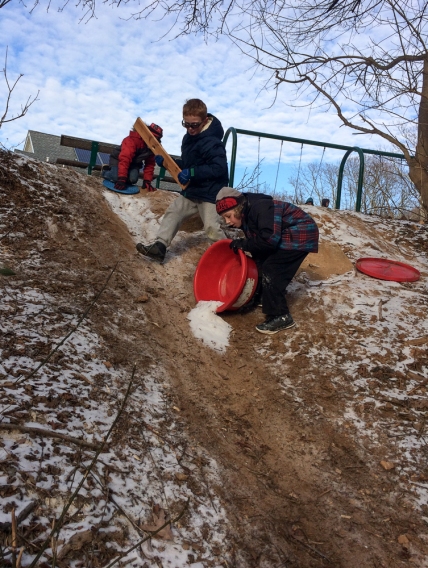 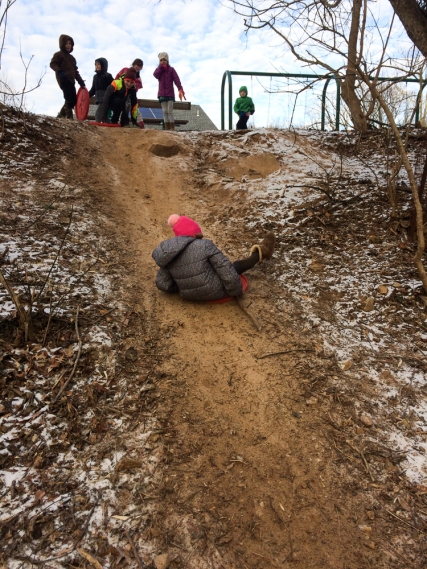 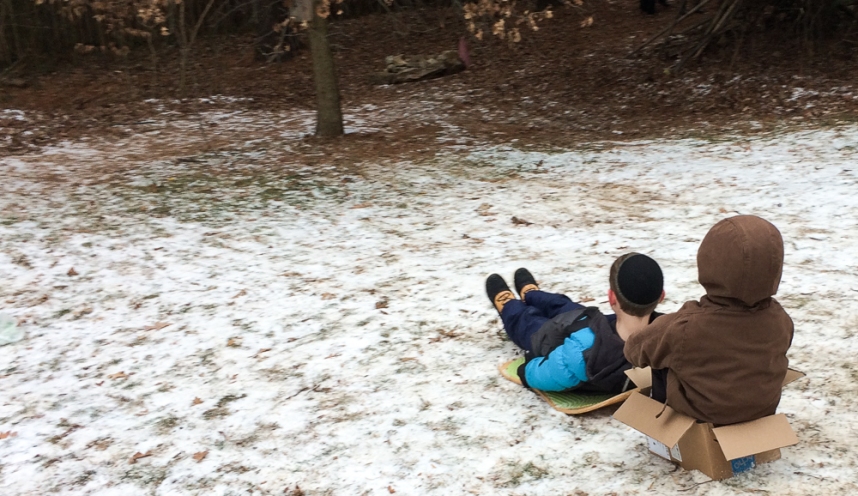 A walk along the stream revealed icy patches that invited first sliding, and then cracking. One entrepreneur began collecting slabs of ice to sell later in his fort. 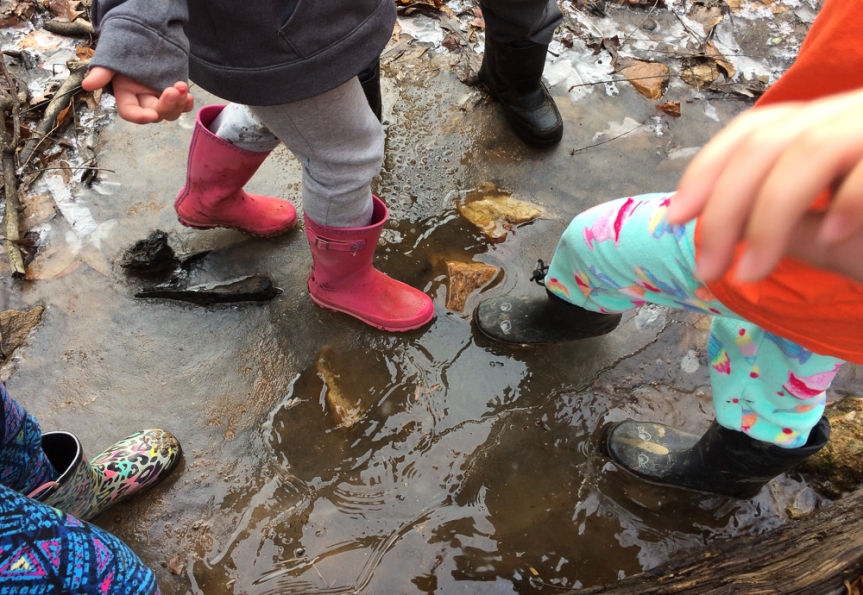 On one bitterly cold afternoon, buckets for collecting water in forts revealed perfect molds of leaves embedded in icy mud. These crystalline forms became precious possessions and were displayed prominently along with other fort treasures. The next day, two girls came running to tell me that their ice “sculptures” had been stolen. “And it’s not just ours – other people are missing their ice, too!” It took some work to convince them that the twenty degree rise in temperature overnight might be the culprit. 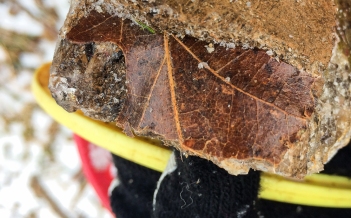 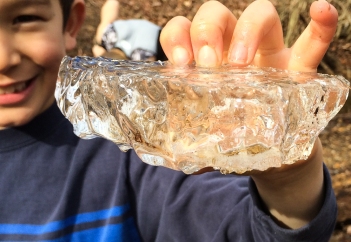 I took one of the JE classes out to the woods on a warm day to locate some other liquid-filled items that we had hidden months ago. When we study how cold-blooded animals like frogs and snakes adapt to winter, we make our own “bag herps” by shaping a pipe cleaner skeleton and placing it in a plastic bag filled with water that represents an animal’s skin and body fluids. These are buried or hidden in a location that the students deem safe from predators and unlikely to freeze.

When we searched for the bag herps, though, we found that most had mysteriously lost their water, rendering them “dead” in terms of this survival challenge. Only a couple were intact; these were re-hidden to see if they could survive the remainder of the winter. “But how did the water escape?” the kids demanded. “It’s plastic!”  We did a few tests back in the classroom and determined that the bags leaked when squeezed. How had they gotten holes in them? This led to a discussion of cell membranes and the damaging effects of frostbite. For this species of herp, ice and pressure from rocks or soil had proven fatal. 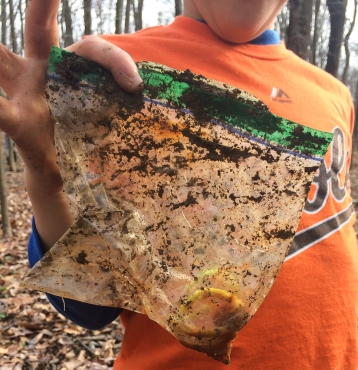 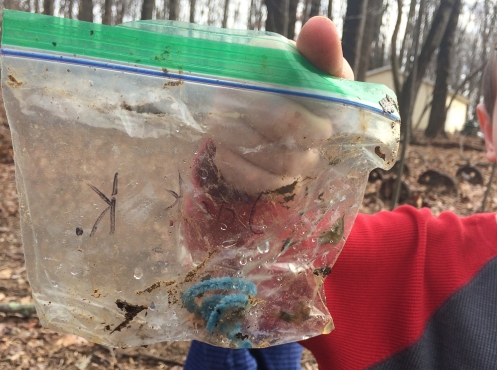 I haven’t yet given up on getting a decent snowfall.  But given the current state of the campus,  I have to agree with the kids I found stirring a pit of thick slurry, who informed me that this represented its own state of matter: “There’s solid. liquid, gas, and…mud.” 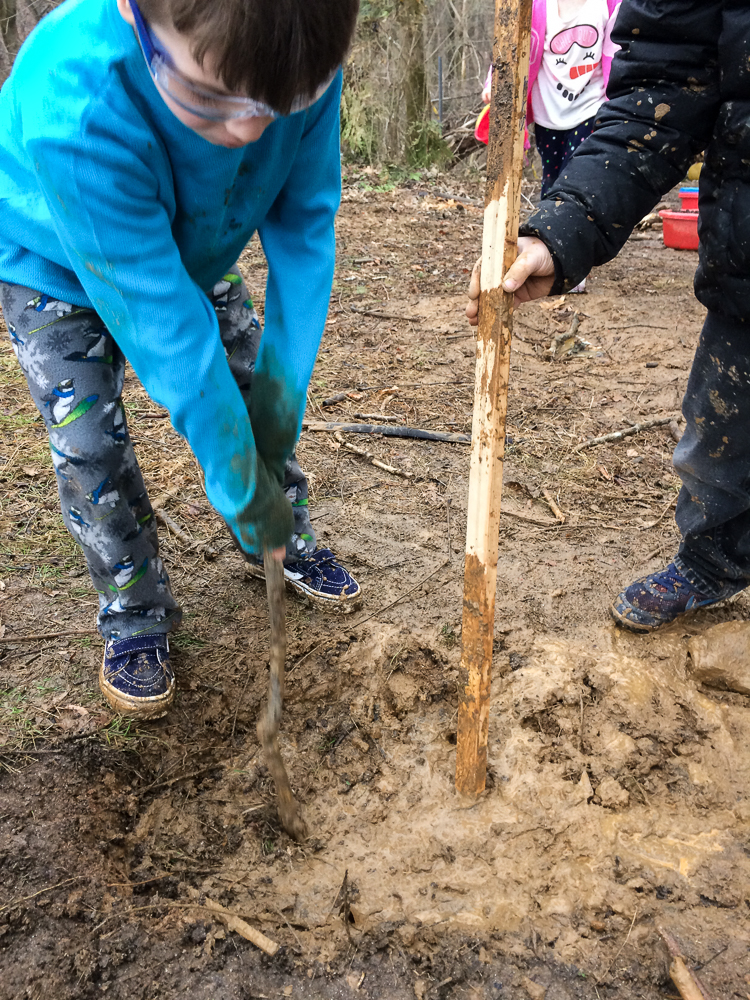 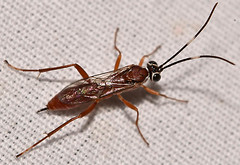 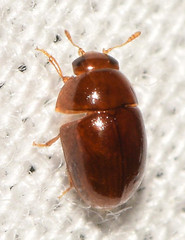