How do you get to know a tree?

“Meet a tree” is one way – a classic introductory environmental education activity. In a wooded setting, a blindfolded student is led by a partner to a nearby tree. The blindfolded person examines and becomes familiar with the girth of the tree and the texture of its bark, and is then led back to the starting point. Once the blindfold is removed, the student attempts to identify which tree they “met.” This exercise involves considerable tree hugging; by the end, many students claim a personal bond with “their” tree.

By prioritizing a different sensory experience than we usually rely on when we encounter trees, being sightless for this activity mitigates another, more pervasive kind of non-seeing, often referred to as “plant blindness.” Plant blindness quite simply refers to the inability or tendency not to notice the plants in one’s environment, with direct implications for lacking awareness of their vital importance on a larger scale.

I know this phenomenon firsthand, though it took leaving the country to realize it. During and after college, I spent time living, studying, and working in Germany. However, it wasn’t until I returned as a tourist 20 years later, with a very different set of experiential lenses, that I realized I had been blind to the natural history of the place I felt I knew so well. My apparent fluency stopped well short of being able to name even the most common plants. I felt lost hiking well-worn trails beneath unfamiliar trees, and immediately purchased field guides to orient myself.

Something similar happened again when I traveled to Tasmania and New Zealand, with the added disorientation of being on islands in the southern hemisphere. My problem in these places was not just in failing to see trees; it was that everything I saw was utterly new and demanded constant attention and research. I was visually overwhelmed. 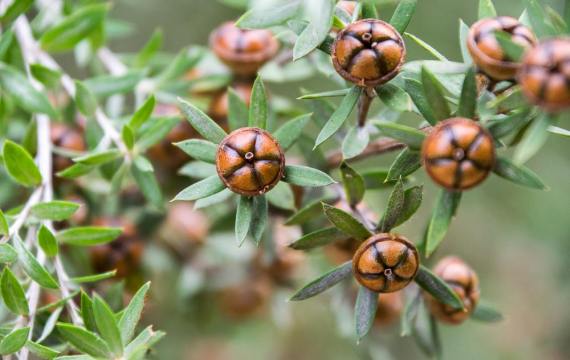 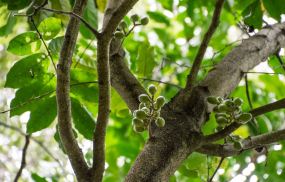 By the time I left New Zealand, I was beginning to recognize common species and enjoyed walking about practicing the names of trees and shrubs.  Back in the US now, without this daily habit, those names have faded, but the sensory impact of the tarata, the cabbage tree, and the pōhutukawa remains. I have no doubt that if I were to return to New Zealand, I would still know these and many other trees. This recent article on a local naturalist’s experience of tree blindness shares truths that I can attest to: once truly seen, trees remain a part of you.

One of my favorite ways at school to encourage the process of seeing and distinguishing plants is a game called Leaf Hunt. The class is split into teams that compete to scour the schoolyard for the greatest number of different species. Before we go out, I ask the class to predict how many species they think we might find. Then the hunt is on.

Only teams that bring in new species get points, so there is no replication between teams. I use my role as judge to teach as specimens come in: i.e., the same plant can produce different shaped leaves, what does and does not count as a leaf (grass and pine needles, yes; flowers, no), the difference between a leaflet and a leaf. The results far exceed the highest predictions of plant diversity.

Yellow buckeyes are the collectible products of trees that have perpetuated a visceral way of knowing trees among Jemicy students for years. They play a central role in the unique woods culture that exists during fall recesses, when kids flock to the places where they know these treasures can be found, collect them by the fist and shirtfuls, hoard and trade them for other goods.

There is a fascinating progression in buckeye identification skills as newcomers learn to first look up – to recognize the telltale hand-like compound leaves and yellow-orange colors that signal the sites where buckeyes fall – run to those spots, and then look down, to spy the shiny brown nuts hidden among the fallen leaves. Buckeye lore has raised the stakes for fort real estate located beneath buckeye trees.Their value becomes so pervasive that it extends well beyond the woods.”We’ll sign you for 10 buckeyes!” I heard some 4th grade boys offer a potential new player for their touch football team, as they headed in for lunch. 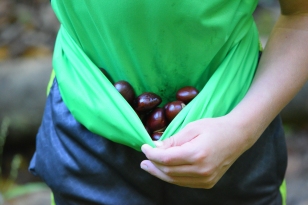 Acorns are another widespread collectible, but their numbers are usually so large that their value is diminished – until it’s time to process them for acorn pancakes. Then, kids have to learn how to distinguish the white oak species that produce “sweeter” (less bitter tannic acid) nuts from those that are higher in tannins. They chant “Quer-cus al-ba” while tracing the outline of their fingers, representing the finger-like lobes of the white oak. White oak acorns are collected by the bucketful, cracked and sorted by hand, then boiled, roasted, and ground into flour. Topped with syrup, sprinkles, or plain, the pancakes are, as one kid described it, “The best tree food I’ve ever had!”

This process of learning to see plant differences continues through using classification systems to identify trees. Teams of 7th graders have been roaming the campus recently photographing leaves, bark, and branching patterns of tagged trees, using a key to identify them by common and scientific name. I watched one boy who has been at Jemicy for several years stare into the crown of an oak and mutter, “I know it’s a Quercus, but which one?” One of our tagged trees was a newly planted willow oak sapling, whose small, narrow, unlobed leaves confounded many kids. “Are you sure this is right?” one asked, puzzling over the key. “It just doesn’t fit the oak pattern.” Questioning is an important part of knowing. 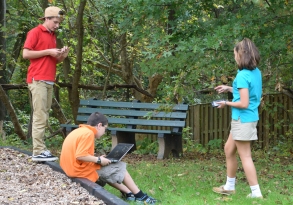 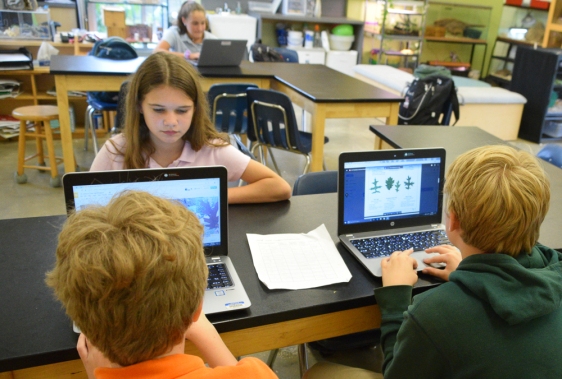 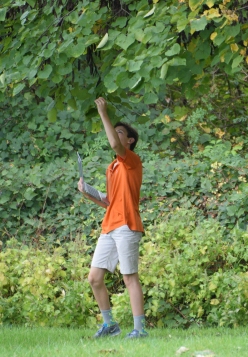 In 1937, when my mother was in high school, she took a botany class in which she collected, pressed, and identified numerous flowers, leaves, and other botanical specimens. 40 years later (and 40 years ago) I attended the same school and made a similar leaf collection. I no longer have my own leaf collection, but I have my mother’s, with her perfect script describing trees by name, appearance, location, fruit, etc. I took it to school to show my students. They recognized in it some of the same leaves they had identified, along with many unfamiliar ones.

“Close your eyes and touch this leaf,” I suggested, when we got to one of the final pages. “It feels like sandpaper!” they exclaimed, learning in that moment a way to know slippery elm just as my mother and I had generations ago – by a tactile sensation completely contrary to its common name. When I close my eyes and run my finger over the leaf, the roughness transports me back to Ohio, to the edge of the school parking lot, to the spot where I first met this tree, now unforgettable.

If you spied sandwich bags hanging from the branches of trees near the science building recently, you might wonder, “What’s going on here?” Maybe your curiosity would lead you close enough to discern mouse-sized lumps of semi-liquid matter in the bags. And then, you would probably detect movement, a squirming in some of the bags. You might wish you hadn’t been so curious.

Or maybe you would be intrigued enough by this overt display of decomposition – a process generally hidden and infrequently discussed – to inquire what in the world was going on here. A seventh grader would tell you that this is a Jemicy-style replication of the first known controlled study done by Francesco Redi in 1668. Redi was trying to disprove the then-popular theory of spontaneous generation, which held – among other wonders – that flies were produced by rotting meat. It’s a simple experimental design: take two pieces of meat (in our case, frozen mice that we use as snake food), put one in a bag that is sealed, and one in a bag with holes, hang them outside, and observe for a week or so. The results are striking, and usually unequivocal. As the mouse in the sealed bag slowly decomposes, it is amazing to see how much liquid it contains. The mouse in the bag with holes also decomposes, but the process is aided by flies, which are attracted to the smell, enter and lay eggs, which hatch into larvae. Any variation on these results forces us to consider what variables we might not have controlled.

Most years, the smell of rotting mouse is enough to make us bury the results of the experiment immediately. This year, though, several students asked if we could dissect the decomposed mice to see what had happened to the mouse internally, and if, by chance, the control mouse contained maggots. “Please? It’s my birthday!” begged one girl. And so the team of yuckologists held its breath and did just that. When we were finished with confirming the theory of biogenesis, we buried the remains in the compost bin, where other decomposers will complete the job of returning the mouse to its mineral components and enrich the garden soil next spring. 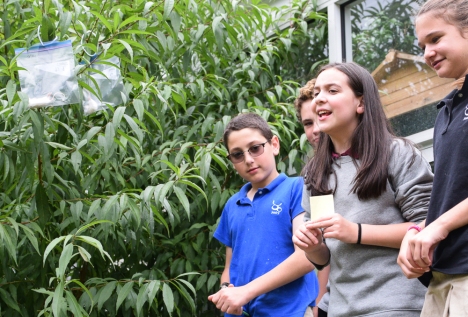 The cycling of matter from life into death, and back into new forms of life, creates gripping narratives and inspires rituals that memorialize the former life and celebrate the new. Impromptu funeral services traditionally celebrate deceased animals at school. A dead squirrel found in a fort received a burial with handfuls of acorns, while a cicada was sent down the stream on a raft, also with an acorn, “so that wherever it lands, it can help make a new tree for another cicada.” The final moments of a goldfish’s life were observed attentively, respectfully; it was eventually buried alongside the squirrel, with its own eulogy. 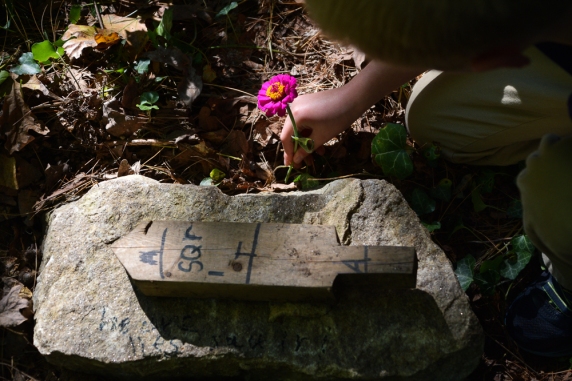 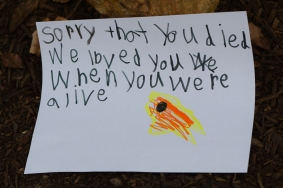 The youngest students get firsthand experience with decomposition and the life it supports by setting up and maintaining a worm farm throughout the year. They supply it regularly with the composted remains of their lunches: apple cores, orange peels, bread crusts, etc. Every so often, they empty the bin to check the worms’ progress. Last spring’s discovery that the mysterious golden cases in the farm were worm cocoons set off a flurry of activity: sorting and counting them, establishing a nursery, keeping watch until the tiny wormlets finally emerged. “Babies! We have babies!” 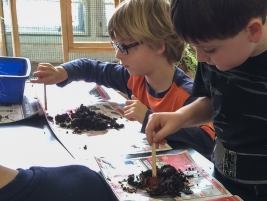 The “yuck” factor is balanced and often overcome by this fascination of witnessing complex, dynamic living systems and the new life that emerges from them. One young girl called out to me from the playground one day, “Come see what I found on the climber! I think you’ll like it, because it’s kind of gross!”

Sure enough, there was a jumping spider (Phidippus audax) with a recently caught stinkbug – and at least two species of flies imbibing bug juices. As a friend put it when he saw the photo, “The small flies have bloated abdomens like they just slurped up some liquid. This looks like a scene in the African plains where the lion has taken down a gazelle and the vultures are starting to gather.”

It’s a big lesson played out vividly in miniature: Life cycles intersect with and depend upon the decomposition of other living things. 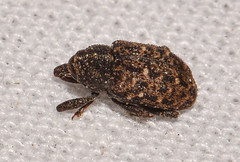 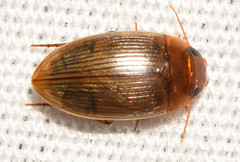 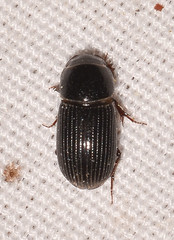 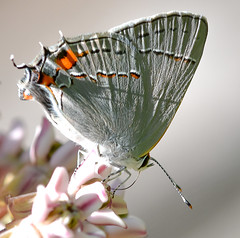 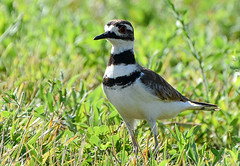 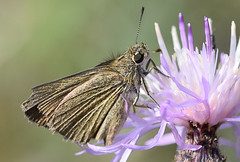 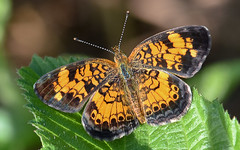 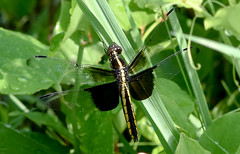 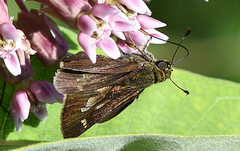